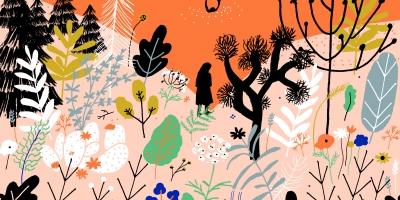 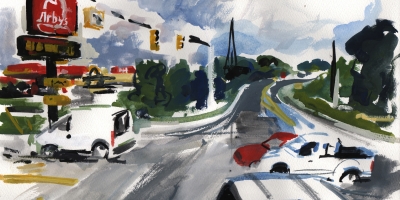 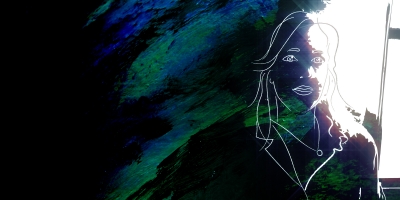 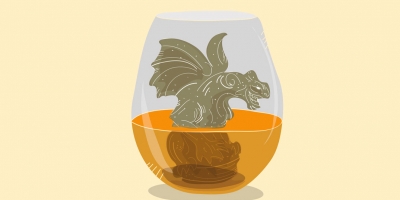 The summer between high school and college, I worked nights at an Arby’s in a truck stop near Dexter, Michigan. Dexter is a cute, idyllic little white-picket town, but to me back then, it was just a pee break on the way to Detroit. I mopped the floors of that pee break. I wiped the booths with Lysol after truckers ate their dinner. I stood behind the counter in my blue visor and took orders for Beef ‘n’ Cheddar sandwiches, which I wasn’t allowed to make because even though my birthday was in August, I was still a year too young to use the deli-style slicer that shaved roast beef. Question: Why is eighteen the acceptable age to operate potentially hazardous machinery? Is there a certain maturity I gained that summer? Did I become more knowledgeable, like snap your fingers and suddenly you’re this totally together person who can be trusted with industrial-sized blades the same way that—snap—turn fourteen and you can shoot a gun—snap—sixteen and you can drive—snap—twenty-one and you know how many vodkas are too many vodkas?

More than anything, I wanted something to happen.

I was invincible, on the edge of my life. Do you know that feeling? Standing on a three- or ten- or twenty-story rooftop, leaning forward, the whole world’s spread out before you, and you think, God, what if?

What if I jump?

What if I fly?

But I couldn’t. I had three more months until I left for college and an eight-hour night shift.

Arby’s Special Sauce. Jamocha shakes. Curly fries poured into wire mesh baskets and lowered into the deep fryer, spattering boiling oil like knife-tips on my skin, which hurt like holy hell but still felt good ‘cause I was feeling something, anything besides my incredible, seventeen-year-old need.

The summer between high school and college is supposed to be revelatory in some way, right? I pictured mine like a coming-of-age sort of rom-com/dramedy involving the following: 1) a cush day job selling muffins at the farmer’s market, 2) a home for my cute, idyllic little white-picket family, and 3) nights making out with the boy I loved. Note the wordplay: boy I loved as opposed to boyfriend. I knew he was seeing other girls, but during that summer between high school and college, I equated love with adventure, and Lord knows I needed one. Four years of As, a scholarship to a swanky school out East, goody-two-shoes rep (which was a total coping mechanism, what with my father being the principal)—all of this made my love for the boy I loved practically clichéd.

He was a loner, Dottie. A rebel.

Get this: A week before graduation, he’d been suspended. For stealing all of the cellos from the orchestra room. And then returning them the next morning. Just to prove he could.

I didn’t stand a chance.

I spread quilts on my bedroom floor to silence any footsteps, removed the window screen, and climbed two stories down a fairly precarious satellite antenna. The boy I loved was waiting at the lake behind my house, and we rowed out across the glass-like water. It was beautiful. Mid-Michigan, mid-May, our bodies tangled in the bottom of the boat, and for the first time ever, I felt like myself: not somebody’s daughter, not an SAT score—me.

The sun had risen by the time I climbed back up the antenna, and as I struggled to replace the window screen, I heard footsteps outside my door. “Megan?” It was my dad, and I dove, fully dressed, under the covers and held my heartbeat. He’d heard me. He must have heard me. His room was just below mine. “Get downstairs,” he said through the door, and I was not invincible then. I was the opposite of invincible.

We sat in the living room, a place reserved for the most serious conversations. I counted squares in the Oriental rug and wished my parents would say something, anything besides “Did you have sex in the rowboat?” So when they told me they were getting a divorce, it’s fair to say I’d asked for it. I remember they sat on opposite sides of the couch. I remember thirty-six squares in the rug. Did I cry? Did we talk about how love isn’t boats or twenty-six years of marriage? Did we talk about how no one is ever invincible?

What I do remember is that neither of them moved out, and the tension in that house was so heavy I thought my bones might crack. I did everything I could to avoid it: making out with the boy I loved, crashing with friends, wandering zombie-like through the aisles of a twenty-four-hour Meijer’s until finally deciding that I might as well earn some money. And so:

Arby-Q sandwiches. Philly Beef and Swiss. Curly fries dumped frozen into wire baskets, dipped into oil, wait ‘til they cool, wait ‘til the end of a shift, wait ‘til I could leave for college and jump off the ledge—one AM, two AM, and after a while, standing over that deep fryer with its boiling wire, I started to imagine what would happen if I pressed the inside of my forearm against the basket, connecting my skin with the sizzling cross-hatch.

That would be something, certainly.

Three months is not a long time. It’s blink-and-you’ll-miss-it. But that summer? A fucking glacier. A watched fucking pot. I’d look at the clock above the food line, shocked that only a few minutes had passed since the last time I’d looked. To pass time, I counted onion rings and wished for something to happen, so when the boy I loved came in to tell me about his other girlfriend, it’s fair to say I’d asked for it. I remember we sat across from each other in one of those shiny vinyl booths. I remember being embarrassed because of my visor, with its awful red Arby’s cowboy hat logo. Did I cry? Did I say awful things, trying to pick a fight because if he was standing there yelling, at least he’d still be standing there?

What I do remember is chicken tenders. Angus Ultimate Beef. Curly fries dumped into boiling oil. It was August. Two weeks left and I could jump: new life, new people, new heartbreak. And for the thousandth time, I wondered what it would feel like to lay my forearm against the basket, to solder my wrist to the wire, to smell my own flesh burning through to the bone, to be an active participant in my life instead of responding to what was happening to me, to do something, to do something.

My skin and the wire were in contact for only a second, but that’s all it took. I screamed and stuck my left arm into the ice bin, still holding the sizzling basket of fries in my other hand. Co-workers must have found me there. They must’ve brought me to the Emergency Burn Station. They must’ve asked what happened, because I remember saying it had been an accident. I’d been careless, I told them, even though hurting myself had taken all the care in the world.

Later, at the hospital, I’d be treated for second-degree burns.

Later, in college, I’d wear long sleeves to cover the bandages and, later still, a four-inch leather cuff to hide the scar, a purplish rectangle of chicken-wire that would, over time, fade to a horizontal line bisected by two smaller lines.

In other words: an F. F for fly. Or French fry. Fucking perfect.

And later, still later, after I’d left that college, and another; left the country, and another; I’d find myself in Chicago in a bar with a woman I loved. When she reached to pay for my drink, her long sleeves pushed back, revealing faded scars that climbed from wrist to forearm. That night was the first time I ever talked about what I’d done—how I didn’t know why I did it and how now, twenty years later, in these years between college and adulthood, I hadn’t found the profound wisdom that explains such hunger, that uncontrollable gravitational pull towards danger. There is no—snap—twenty-one and now I understand it—snap—twenty-eight and now I have healed—snap—thirty-five and I’m here, I’m invincible, I don’t have anything left to learn.

There’s only me, here on the edge of my life.