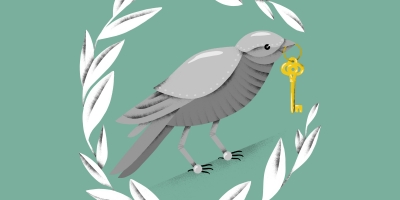 “You know who was the first face I saw when I came to Riverside?” Oliver Winston says to me. “Him right there—and I see him almost every day now.”

Henry Glover laughs, since he’s the one sitting in the folding chair nearby.

“I got off the bus,” Winston says, “and he was there at the station. I said, ‘Is March Air Force Base an easy ride?’ and he told me exactly which bus to take. Then I came back here a few days later, and I met this girl. I came to Riverside after that to see her, and we were on her porch talking, and I knew I had to get that bus, but it was after midnight. I walked all the way to March—that was miles!”

“But she was worth it, right?” Glover says in his soft, Cheshire Cat-grinning voice.

By chance, he was not sent to Vietnam, and when the war ended, he stayed here. He didn’t marry that girl, he married another one, and their daughter and I went to elementary school together.

This is the sidewalk in front of Orange Valley Lodge #13, on 12th Street near Park Avenue, a social network of the highest order. On my way home from work, I often drive one block off Martin Luther King Boulevard and see the men gathered here in their folding chairs—maybe see my youngest brother-in-law, or a cousin, or a man who used to love my mother-in-law’s sister. I will hear the news of who’s in town for a graduation, who might have just died, whose daughter just went to the Olympics as a sprinter, or maybe just critiques of the day’s news: a fire near the Santa Ana River, a theft of heavy equipment at a construction site, President Obama’s trip to Hawaii.

The line of men in folding chairs is a changing cast, but some faces are semi-permanent. Glover came to Riverside in 1953 from Albany, Georgia, when he was fourteen; Billy McCloud came in 1954, from Enterprise, Alabama, and he was fourteen, too. Now they sit with their legs out before them, comfortable, companionable, greeting everyone who slows a car and leans out the window. “We start out here, in the summer,” McCloud says, “and then around four when it gets hot, we move across the street under the trees.”

My middle daughter told me last fall that a friend of hers, a college athlete, began a Twitter, and within twenty minutes, had 4,000 followers. Twitter may be the water cooler of the internet, and Facebook users may be advised to be genuine and honest if they want real friendships, but none of that would work in front of Orange Valley Lodge. You need more than 140 characters to tell these stories, and you can’t post digitally altered Instagram selfies.

The building has its own epic history. It was once the Stokes & Wiley Grocery Store and Mercantile Hall, built in 1912 and used for many purposes: by the Eastside’s African-American and Mexican-American community; by housing businesses; by an adjoining meat market, now gone; and by the order of black Masons. A document, which created one brotherhood, reads in flowing script: The Original Dispensation Formulating Orange Valley Lodge, by the Free Masons, Lodge Instituted October Fifth, Year One Thousand Nine Hundred and Five. The men whose oval portraits look out somberly from upstairs are Riverside’s black pioneers: Goodwin, Beverly, three generations of Carters, and Oscar Harris, who owned the city’s sanitation contract for years.

Robert Stokes is called the patriarch of Riverside’s black community; he arrived here in the 1870s with a family from Georgia, taking their last name as his own. According to the historic accounts by his family: “He was a big heavy-set man, weighed more than 200 pounds and was over six feet tall.” In the Riverside City Directory, he is listed as a Special Policeman in 1889, the first black man to serve as law enforcement. Stokes and his wife Mary owned a hog ranch at Seventh and Market—where the Fox Theater that premiered Gone With the Wind in 1939 now stands. His nephew, David Stokes, came to Riverside in the early 1880s, and Mary Stokes helped him with the financing to build the Mercantile Hall.

In 1965, after Lowell School—an elementary school which used to stand a few blocks away, in poor condition because only black and Mexican-American students attended by then—burned in an arson fire, a temporary Freedom School was set up on the Lodge’s second floor.

When I stop by one afternoon, John Bennett is standing on the sidewalk, looking up. “An older white man helped me with my homework,” he says. “They had the picture in the newspaper.” Then he turns to see the place where Lincoln Pool used to be. “I almost drowned in there!” he laughs, and the assembly begins to recall dates at Sweet Shop, dances in the clubhouse, and baseball games in the park. It’s as if the grassy expanse where the wooden buildings and pool once stood is an impressionist painting: crowds of people are caught in the retelling, their faces and clothes blurred in movement.

Sitting in a folding chair near the other men is LeRoy Barber, who’s often dressed in immaculate pinstripes, vest, and fedora with a feather, his jewelry gleaming. Now, that’s an outfit worth a selfie, but LeRoy dresses to impress himself, and his friends right here, not an Instagram feed. A Master Mason at eighty-one, Barber’s name is inscribed on an elegant black table inside the Lodge, along with other members. He joined the Air Force in 1952 out of Florida, became a Mason in 1962 while serving in Germany, and came to Riverside in 1975, stationed at March.

“I have a key!” he exclaims, and opens the door to the banquet room that has seen so many events. “I’m a midwife baby,” he says, sitting at that table, gesturing with a pinky ring flashing in the light. “I was born in Florida or Georgia, and I’ve written to every place in both states to get records. But it doesn’t matter—I have a passport now! I went everywhere in the service.”

Barber wants Orange Valley to be open regularly, for cards and music and meals. He wants to run the bar and play his extensive collection of blues. “They used to play bingo and pinochle and bid whist,” he says. “But we do good things. On Sundays, from twelve to four, we feed 250-plus homeless people out here. We even take meals to the local parks. We’ll feed anyone.”

Outside, the folding chairs have been rearranged again, as others arrive. McCloud, Glover, and the rest of the men trade stories—some brand new, some everyday. Travis Coleman is here today—he came at seventeen from Idabel, Oklahoma, with his mother, in 1945. “We lived in Red Hollow, right there on 14th Street,” he says, pointing across the old Lincoln Park. “I remember Daisy Carter, and the four sisters—they all worked at the Turkey House. Oh, yes, I remember those girls.” He’s speaking of my mother-in-law, one of the sisters, when she was a beautiful teenager.

Gonzalo Gomez is here most days, too—he came in 1966 from Juarez, Texas. He sits next to Joe D. Hunter, who arrived in 1955 from North Carolina, and Robert Wood, who came in 1950 from Little Rock, Arkansas. “I was stationed at Camp Pendleton,” he says. “Retired in 1962 as E-7 from the Marine Corps.”

One evening, when I come back from visiting the sidewalk, I tell my youngest daughter that the men had news of the death of one compatriot, aged seventy-seven. All afternoon, people stopped by to sign the two condolence cards—hundreds of signatures in all. “Go on by the Lodge and they’ll tell you when the funeral is,” her father, my ex-husband, had said to me earlier that day.

My daughter offers me this early version of a social network: in Rome, in 1501, a noseless, armless fragment of a statue of Hercules was unearthed, placed on a pedestal in Piazza Navona, and named Pasquino, after a tailor to the Pope who loved Vatican gossip. Insults written by Romans, on government and papal corruption, were hung on the statue. Then another statue, this one of a river god, was unearthed and placed across town, on Capitoline Hill. This figure would “ask” Pasquino his opinion on visiting cardinals or officials, and people would race back and forth on foot and horseback to see the “posts” and insults plastered all over the marble men.

Here on the sidewalk, it’s as if an older time like that is preserved in the amber evening light, thick with remembrance but also shot through with frequent laughter. What does it mean, in 2014, when Facebook measures the social worth of one billion people, to park your truck at the same place most sunny days, or even cloudy ones, and set your folding chair on the same cement where you will see your ten closest friends and countless others who park for a few minutes to share news of a death, or a party, or a glimpse of someone they knew forty years ago? What does it mean when you talk today’s politics or sports, but also tell the same story about walking ten miles to see a girl, or the story about the woman you met in Germany when you were a young soldier? What does it mean to carry Georgia or Alabama or Juarez in you, but to live your permanent days here in the place you chose, or the place that chose you?

“Going into the military, that was our way out of the South,” Billy McCloud muses one afternoon, his sunglasses reflecting the palm tree nearby. That palm was only three feet tall when it was planted in the sidewalk, back when the Mercantile Hall was built; it now towers into the sky.

McCloud, whom passersby jokingly call “The Mayor of Riverside,” adjusts his diamond ring and says, “I’da made a slave ten minutes. The first time the man said to me, ‘Hey, nigga, get over there and hoe that field,’ I’da said, ‘How much you payin’?’ When he said nothing—’I own you’—I’da told them to find a tree—not for me, but for him.”

Coleman nods and looks across the park. Gomez’s small white dog lies at his feet, and Henry Glover says, “I heard that.”