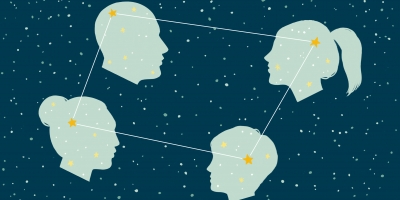 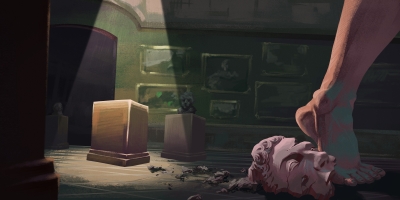 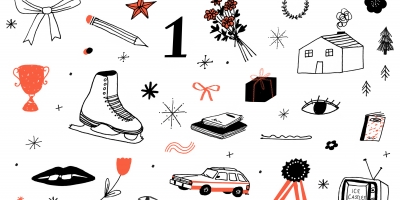 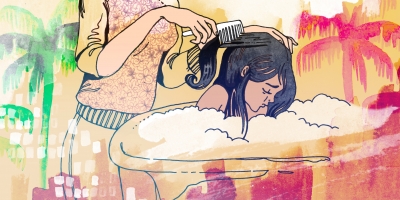 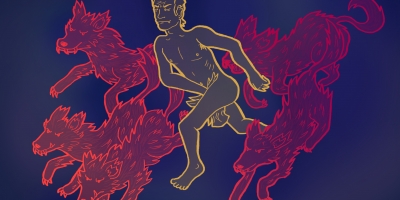 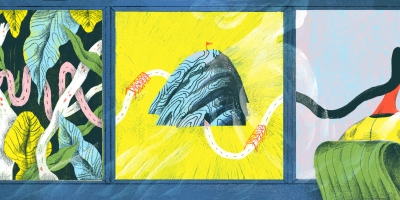 The spring of her disappearance was the spring of the great wind. Not a gusty wind but a constant rush, as if all this time the world had been on a train and someone finally opened the windows. The trees filled with kites, like so many girls with gum in their hair. Clouds zoomed across the sky as if late for something.

“Where are the clouds going?” Celia asked.

“To the next part of the sky.”

“Don’t they get bored? What happens when they get to the end?”

“When they get bored, they become rain and come down to visit the dirt and the fish.”

She outgrew my fanciful replies to her fanciful questions that year—or rather, her questions grew up as she did. She wanted to know why no one else in her third-grade class just lived with one daddy and no one else, and where her other daddy went when he died, and who gave birth to her if she had two daddies because men can’t have babies.

It was a long spring.

Ideal Head of a Woman came to us in ‘97, the gift of an anonymous donor who bought the piece at auction in Berlin. Italian sculptor. I’d been at the museum for eight years by then—six as a volunteer, two as a curator. Eight years: the minimum length of time it takes an artist to accept professional failure. Eight years: Celia’s age. Eight years: the average lifespan of someone who contracted HIV in 1987 and didn’t know until it was too late. Dale would’ve been forty that year.

The piece was not a bust; a milky marble stump extended just a few inches below the chin. The beginning of vocal cords, and that was it. Not a neck but a neckish gesture. She was placed on a pedestal four and a half feet high in the center of the Cyrus Q. Tomblay gallery. Though the sculpture was of minor artistic significance, I couldn’t shake the feeling that we’d gotten lucky.

On sunny afternoons, I watched the fingers of light creep across the dark polished floor of the museum, inching closer to the Ideal Head. Inevitably, the fingers climbed her pedestal, and for a moment each day, closed around her throat-stump like the slash of a necklace. They proceeded upward, caressing her lips, cheeks, blinding the vacant right eye and then the left, before slipping off the rosebud curls high on her forehead and flinging themselves to the floor ten feet behind her.

Please don’t think me strange for referring to the work with the feminine pronoun. It’s long been a habit of mine to assign gender to pieces. As a child, I spent a lot of time in museums, leaving behind relatives and schoolmates and entering a world populated by my real friends—the paintings and sculptures. I’d make my rounds, visiting with them the same way people used to make social calls on Sundays in the antebellum South.

Magritte’s La Corde Sensible (The Heartstrings, male), with which I felt closest, was always eager to learn what I deemed important world news—who’d medaled in the Olympics, which celebrities had married or split up, the larger plane crashes. It was I who told The Starry Night that we’d landed on the moon. Two Children are Threatened by a Nightingale pestered me about my love life and would report the latest gossip from the Elmore K. Hew gallery: accumulated dust, flash photography, boredom-slash-depression among the less visited works. When a favorite painting or sculpture was taken off display for maintenance or rotation, I felt its loss. The Heartstrings went on loan to Kunsthistorisches in Vienna when I was sixteen. I thought about the new people who would look at it for the first time, stop and wonder at the wine glass as big as a countryside holding not cabernet but cloud, somehow empty and full at the same time. I wondered how many would linger, let the painting’s pale green and blue tendrils curl into their mind and cling there. I liked being connected to the world of strangers this way. Like we knew the same people.

For fun, I taught a sketching class at the museum on Mondays. Courses were open to the general public and usually included artists of all skill levels, but the month she disappeared, a group of advanced students from the Art Institute booked every slot. They were talented, but because they knew each other already, a tough bunch to get focused. During our last meeting, I had them sit-sketch Ideal Head of a Woman.

“What does the Ideal Head smell like?” I asked the class. This was a nonsense game an undergraduate instructor of mine had used to good effect. It encouraged students to think beyond the visual.

Someone said hydrangeas. Someone said a field. Someone said fresh milk. The woman with a glob of rings dangling from her necklace but none on her fingers gestured at the window and said this goddamn wind. The joker said almond milk but refused to admit he was kidding.

“Hydrangeas don’t have a smell.”

“Not everyone can smell them. It’s genetic. Like white truffles.”

“I thought that was asparagus pee.”

“No, the asparagus pee thing is that not everyone is affected.”

“It’s the other way around. Everyone gets it, it’s just that some people don’t have the ability to smell it.”

You can imagine my surprise when I looked at their drawings in progress and found incredible variety. It was as if they were each looking at a different sculpture. Were they trying to pull one over on me? Surely not; they seemed so benign. Phaedra included her cat’s name when she signed emails.

I gently reminded them that the point of sit-sketching was to capture the object as realistically as possible—no impressionistic liberties allowed. Still, I saw every variety of nose emerge on their pages: narrow, button, hooked, pointy. Some nostrils flared like wings, others were rendered so flat you’d think the Head incapable of nasal respiration. Round eyes, tilted eyes; long mouths with thin lips, pouty mouths with fat lips. Even the shape of the face, which was clearly an oval (as I recall), varied.

Finally, I asked everyone to compare sketches. They were just as astonished as I was. Their bickering grew so forceful (I’ll never forget a young man’s screech as he repeated, “But look—there’s no lenticular fold! No lenticular fold!” while stabbing a woman’s sketch with his pencil) we had to put up a temporary barricade around the sculpture until we could escort them out. I never heard from any of them again.

Then, one morning, the week after the sketching debacle, she was gone.

I entered the museum early, as was my habit, at six-thirty, turned on the bare minimum of lights, checked the thermostat (70 degrees), hygrometer (48 percent RH), telephone messages (one, a hangup). I left the second-floor lights completely off and let the gray dawn whisper through the skylights. It was a pleasure to be among the art early in the morning. Like the joy of watching a loved one sleep.

I felt it when I reached the top of the stairs. Something was off. The air felt fuzzy and there was a weird smell, like flowers dying on the vine. My eyes went right to the Head’s place, and for a second I thought we’d acquired a new piece, a postmodern sculpture: white, rectangular, wood, standing on end, 4.5’ x 12” x 12”. A statement about middle-class entitlement in America from the hotshot of the week out of Yale. Titled something like What Are You Looking At? Gender-neutral.

But of course that wasn’t the case. The Head had vanished.

I checked the restoration room, the central office, the closets, even the bathrooms. Then I accessed the security files.

I set the fast-forward to x4 and watched the footage from a camera trained on the center of the gallery, where the Head was. At 03:12:44, I stopped and rewound: the Head was moving. I went back thirty seconds and watched, my heart pounding in my throat.

The Head began to vibrate side to side on her pedestal at 03:11:59. The motion intensified over the next thirty seconds, and at 03:12:33, she was rolling in slow circles along the edge of her neck-stump. Her momentum increased, and at 03:13:41, she fell off the pedestal. I gasped, reached out to the computer screen in an attempt to catch her.

But she didn’t break.

She lay on the floor, right cheek pressed to the polished wooden floor, and rested for twelve seconds. At 03:14:01, she began to grow.

The marble of her neck lengthened, spread into shoulders. Delicate collarbones jutted from her chest, which swelled into existence at 03:14:41. Then came her waist, two arms, bellybutton, hips. At 03:15:50, a mound of pubic hair carved itself into the place where two legs had sprouted and were now extending. Her feet were oddly long.

By 03:16:30, the Head had become a complete body. She wiggled on the floor like Houdini in a straitjacket. Her marble began to crack, and suddenly it shattered and she was free of it, a flesh-and-blood human. The marble shards surrounding her looked like flower petals.

She was the palest woman I’ve ever seen. She stood slowly, took a couple tentative steps. Then she turned, looked directly at the camera, and waved. It was a small, bittersweet gesture, the kind you make from the window as the train pulls out of the station while your lover stands on the platform.

The investigation took a month. After I swept up her shed marble skin and sprinkled it down the length of a neighboring alley, I corrupted the security-camera files (I’d always warned the museum against going digital). I was helped immensely when the wind felled a 150-year-old oak, whose vast reach took out power lines and delayed our opening by two hours that day. The paper ran a sweet human-interest story about neighborhood children reunited with their kites.

They were sure I’d stolen it. I don’t blame them. It was the only logical conclusion. They warned me about obstruction of justice, outlined the harsh sentences handed to art thieves. If I was guilty myself, or hid pertinent information, I’d be arrested. Celia would enter the foster system. But the truth was more delicate and irrational than they could handle. Sometimes, the truth only causes more trouble. I had a responsibility to protect the Ideal Head just as I had a responsibility to protect my daughter.

They looked through the house, interviewed me ‘til my eyes crossed, searched through my emails and phone records for evidence of a black-market deal. But of course there was nothing to find.

“Well, it didn’t just get up and walk out of here,” a detective said.

They questioned Celia once. I was present but not allowed to speak. They showed her a photo of the Head and asked if she’d seen it. She had, in the museum. Have you seen it outside the museum? they asked. She had not. Where did she think it went?

She thought about it and said, “Maybe she got bored. Maybe she wanted to visit the dirt and the fish.”

She looked at me slyly. It was a look that said, I’m on your side. In that look, I could see the woman she’d become.

The police said there was nothing else they could do. The museum would have to hire a private firm if they wanted to continue the investigation. They declined; as I mentioned, the Head was not a major piece. It did not draw visitors or win over grant committees. The insurance company covered the loss, and within a year, the case was largely forgotten.

They removed the pedestal where the Head had perched. I went about my duties as I always had, though I missed her stoic presence there in the center of the room. On sunny days I’d watch the fingers of light slide across the floor, stalking absence.