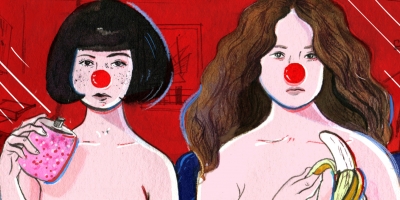 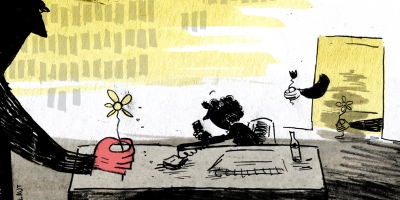 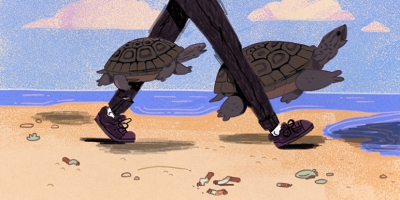 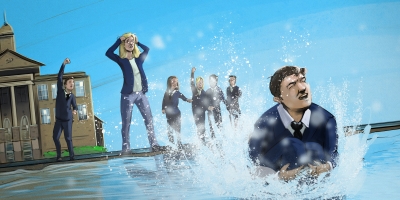 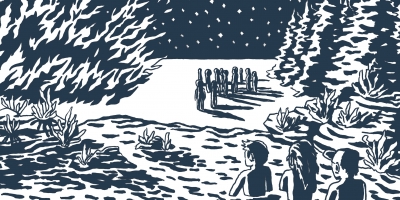 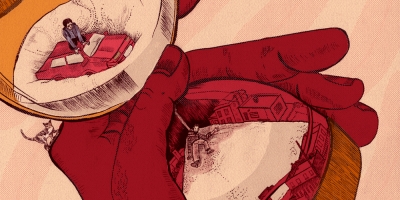 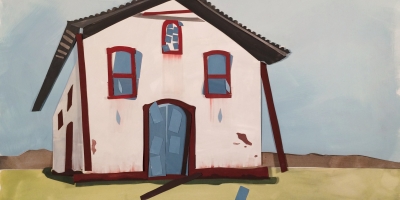 We never knew a homeland, except for the one Mama talked about in stories. She called it Benghazi, the gh a guttural sound softened by yearning.

I was too young to retain memories of a trip we took to Benghazi for my second birthday. Too young to remember the cake they made for me. Too young to recall the dress I wore, a red velvet confection embellished with white lace. Mama showed us photographs of family we’d never met, cousins who shared the sleepy droop of our eyes and the soft swell of our cheeks.

I did not possess these memories, but I knew they belonged to me, like I knew I belonged to Benghazi. I was not born there, nor raised there, but I knew that homeland was just another word for belonging. And I did not belong here, in a California where the brownness of my skin was somehow the wrong kind of tan, where teachers reduced my name to a single consonant because the vowels were too delicate for their tongues, where my mother’s headscarves drew hostile stares from the other mothers at school.

Here is a story that every immigrant child knows: the myth of return, the dream of going back to a place I only knew from folktales my parents told me. Benghazi was a fantasy they harbored at the edge of memory. Benghazi was a benediction my mother invoked in grief. Benghazi was a promise that one day we would be as we once were, or as we were supposed to be.

I was in college when I first watched Back to the Future. This is the only scene I remember: Doc Brown is about to board the DeLorean. Marty McFly stands by, videotaping with a camera perched on his shoulder. Doc is suddenly distracted by an approaching van.

Who? Who? asks Marty.

Who do you think? shrieks Doc, lunging away from the DeLorean. The Libyans!

Guns blaze. Bullets fly. Doc Brown is shot. A dark-skinned man in a skullcap towers above, his face sneering, babbling incomprehensibly. He turns to Marty, aiming his gun.

I turned off the TV.

I was ten years old. I was strolling down a Benghazi street for the first time. Gelato dripped down my forearm. My uncle, the youngest of my father’s brothers, led us back home. The sun beat down on us. I could feel the sweat gather on my hairline, could feel it darkening the pits of my T-shirt. I was too young to capture the attention of men, and so I walked with a heedlessness I can no longer perform, lapping up gelato with my tongue.

Benghazi is a city hostile to pedestrians. The sidewalks are cracked. Some streets are unpaved. You are vulnerable to the petty judgment and comments of those passing by. But everyone walks anyway, because this is how best you experience the city: with perfunctory nods to shopkeepers leaning in their doorways, giving asallam-u-alaikums to neighbors sitting outside their homes, kicking soccer balls back to the children to pass them your way. You become acquainted with the sizzle of gyro meat as it revolves on a spit. You watch young men in espresso stalls make santrafeesh, a dessert that marries hot milk and cornflakes and nuts and Nutella in a polygamous union. You pass my grandfather, who sat in a plastic chair on the same neighborhood corner every evening, turning the street into his living room. (He never let me pass without asking me where I was going.)

If the pulse of a city is determined by the pace of its pedestrians, then Benghazi is a city characterized by lethargy. The athan calls, and people stroll at a leisurely pace to the masjid. The sun rises, and we take a languid walk to the market for bread. We awake from an afternoon nap, and our legs carry us to the dessert shop on the corner.

In 2011, Benghazi lit up with fire. Overnight, a small courthouse demonstration turned into a city-wide rebellion. Ash-shab yurid isqat an-nitham: The people demand the fall of the regime.

A few days later, Mad Dog Gaddafi stood above the fray in Green Square and promised to fight until the last drop of blood. Artillery fire soon drowned out protest chants.

In California, my family’s television stayed on throughout most nights. We witnessed the uprising through Twitter hashtags and Facebook groups and WhatsApp messages. We saw the streets of our neighborhood become backgrounds to firefights and militia clashes. We saw Benghazi crumbling on our phone screens, bomb blasts rocking the city. From our couches, we cheered revolution.

We talked to aunts and uncles over crackling phone lines, but what could be said to quell our diasporic anxieties? How could we call it a homeland if they were there and we were here, in California?

Mama says: When this is over, we will return. We will help rebuild.

It is guilt, not grief, that pervades the immigrant experience. The guilt of not being home. The guilt of leaving at the end of summer. The guilt of being safe. Our summers in the city did not absolve us of our shame. Every summer we return, and there is evidence of our absence: new babies, new marriages, or people who are no longer there, family members who’ve evaporated into history.

That year was one long revolving news ticker delivering reports of our loved ones. A twenty-four-hour livestream produced footage of our city’s destruction. We passed along links to grainy YouTube videos, hoping an object in the shadows of an embattled street corner might provide us a clue to our salvation.

In one video, a woman’s camera is aimed through a window, to the streets below, where men in yellow hats attack civilians with clubs.

They want to set us on fire, she says, over and over.

They want to set us on fire.

My cousin, Ahmad, was unarmed when he was shot and killed by government forces in Benghazi during the first few weeks of the revolution. In one of the last photos he ever took, stored on his cell phone, he is staring steely-eyed into the camera lens, holding up his fingers in a V, for peace. Members of my family suspect he took these photos with the expectation that they would be used after his martyrdom.

When he died, I scoured our summer photos for images of Ahmad, but only found one, in which he is seated to the side of a posed family photo, staring intently at something off-camera. This is how I remember him, at the periphery of every frame. He slipped in and out of scenes like a bit character in my life. Once in a while, telephone calls from Benghazi brought news of his exploits: Ahmad got in a car accident. Ahmad got a job. Ahmad is thinking of coming to America.

Ahmad died, in his twenties, at the entrance of an elementary school located across the street from my grandfather’s house. On that same day, ninety-three other Libyans died in Benghazi. We ululated to celebrate their sacrifice. Funeral tents were erected at the mouth of each home. A liberated Libya owes its salvation to these people, we said.

A mural was painted on one of the walls of the school where Ahmad died: “Our hero Ahmad Ali Herwees,” it read, “you are absent in body, but your spirit lives on in our hearts.”

More than a year after Ahmad’s death, and only a few miles away from where he died, American ambassador Chris Stevens was killed in an attack on the US diplomatic compound in Benghazi. The loss of American life turns every conflict into a tragedy. This is how conspiracy guts a homeland, how awareness can destroy a mother country. Benghazi stopped being a place and became a Twitter trending topic.

#Benghazi is a conspiracy.

#Benghazi is a meme.

#Benghazi is a joke.

Then secretary of state Hillary Clinton was forced to appear before the House Select Committee on Benghazi to answer for the failures of revolution. In an eleven-hour hearing, the word “Benghazi” was said 345 times. This kind of repetition destroys meaning. Benghazi perished in their mouths, strangled by their tongues.

Michael Bay has never been to Libya. This much is clear from the set of 13 Hours, an action movie depicting the 2012 attack on the American embassy in Benghazi, starring John Krasinski.

It is filmed in Malta, not Libya. The island is denser than Benghazi. I strain hard to look for the gelaterias my uncle always takes me to when I’m there for the summer. I look for my family’s neighborhood, a famous area bisected by a road called Pepsi Street. I look for my grandfather, and his street corner.

But this is not my Benghazi. This is Michael Bay’s Benghazi, a volatile warzone. John Krasinski and James Badge Dale play CIA contractors. As the film’s protagonists, they’re supposed to help us understand this dusty place, this exotic battleground. They drive along the Mediterranean coastline, and then through Benghazi’s streets, where they suddenly hit a dead end. Militants surround their car. All men, they’re armed with guns and weapons. I realize, watching the movie, that I am examining their faces for proof that they’re kin, as if I might recognize a long-lost cousin. But these men are not Libyans, they’re specters of our fear. They are menacing, bellowing commands in a language that resembles Arabic.

There is anxiety in John Krasinski’s eyes. He has a family at home. Two children. A wife. Here we must feel sympathy for this man, who came to a country he does not know, a homeland that is not his.

The militants close in on the car. We know nothing of their families. We don’t even know their names. Their dark skin, their black hair, the robes they wear: these are the signifiers of violence.

Benghazi is a ghost.

Both of my grandparents were still alive when I last visited Benghazi, in 2012. My grandmother had not yet discovered the cancer. A couple years later, a stray bomb would hit the house next door, and she would fall from the force of the impact. As the doctors examined her for a concussion, they would find the cancer, living under her skin. But in 2012, good health still colored her cheeks.

That summer, Libya was holding its first elections. Everyone in the city walked around with blue fingers, evidence that they had cast their vote. Militiamen guarded the school buildings where the voting was taking place. Once in a while, there was an exchange of gunfire, but it was largely peaceful. This felt like progress.

Later, my cousins sat around a table. They asked me whether it was time for my return.

How do you return to a place you never belonged to? I said.

They didn’t understand the question.

What do you mean? they asked. Benghazi is your homeland.