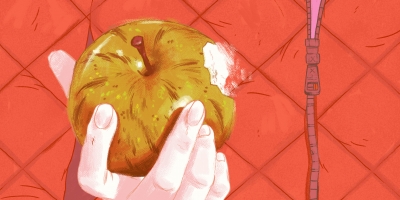 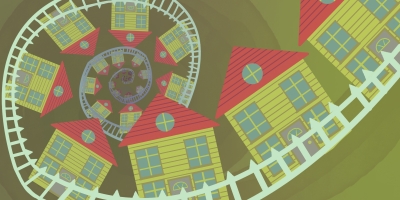 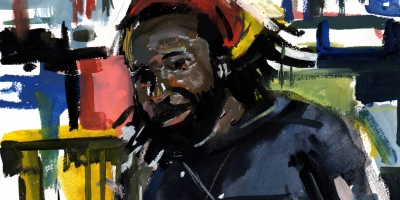 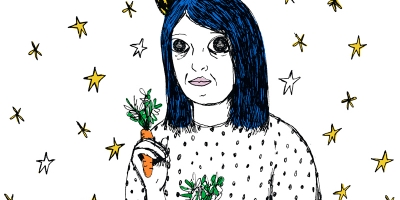 They all looked the same. Maybe not. Maybe it was in their training, the way in which they got down on all fours, tape measure in hand, desperately trying to recall those spaced-out days spent in math class. Those days they made themselves believe they’d never need to know the square footage of a six-sided box, which now served as the bedroom for the little girl who wondered how many more of these visits she’d have to endure before returning to the only person who mattered.

There was nothing social about their work. It was cold, and calculating, and, well, stupid. At first the questions seemed genuine, as if they might lead to escape. But with each changing of the guard, time and space lost measure. Their incompetence—it could be blamed on youth, yet the Guardians came in all shapes, sizes, and ages. The younger ones were cute and easily forgivable, as they had yet to harden to the world of discarded children. The older ones, over the years, had the blood drained from them, their frigid smiles a reminder to the myriad young babes stuck in limbo that time, not hell, had frozen over.

This girl would go sixteen years blending their faces, finally forming one monumental Guardian of good intentions falling short. Initially, she looked forward to their visits. Their eyes, idealistic and glowing, provided temporary warmth on those days her body felt chilled by the openness of her life. These Guardians were supposed to keep her secrets. The ones she could confide: how the lady of the house, the Gatekeeper, had her practice her drawings before those visits to the Psychiatrist, where under watchful eyes the girl would replicate a perfect crayon-drawn mother, father, and child, devoid of any defects. Or how the Gatekeeper’s man-friend hung around from sunup to sundown, but disappeared whenever the Guardians checked in—how she was supposed to keep him secret from anybody outside the “family.” Or the nightmares, where unseen figures and images formed to tell a story she had no way of putting into words. So instead, she released these memories through warm piss that soaked her pajamas and the Gatekeeper’s meticulously laundered sheets, disrupting the order her new home was supposed to deliver. Surely, those sent to watch would guard these secrets with their lives—at least, that’s what she needed them to do. But they were merely Guardians of time. It was against their watch she monitored the progression of her life, reading into their faces how close she’d come to dismounting the merry-go-round that would either speed up or slow down with each changing of the guard. These men and women arrived armed with a briefcase full of questions, but never answers.

With each new Guardian assigned to the little girl, she built up the skill in detecting just how long they’d stick around. At first, she wondered if she bore responsibility for the haste with which they departed, or if there were some written rule of the Guardians, one that forbade investing too much time in any one child. As she grew older, a few would give a heads up, announcing it would be their last visit due to reassignment, or a need to return to school, or getting married, or having a baby, or simply not wanting to wake up, yet another morning, checking in on kids like some throwback Santa who, instead of toys, is supposed to deliver hope. By the time the little girl had outgrown baby dolls and tea sets, she’d known instantly whether the one sent to clear a path ahead would take off running. This never stopped her from liking a few of them, though, particularly the ones who would ask her questions as if they genuinely wanted to hear answers. Questions like: Do you get enough to eat? Enough sleep? Enough time outdoors? Do you like it here? Have you made any friends?

The one question they truly came for, scooting to the edge of their chairs after quickly glancing around to make sure the Gatekeeper was out of range. Their faces transforming into something serene and secluded they hoped the little girl felt comfortable enough to lose herself in. Or, as the years wore on, learning to tilt their heads at the perfect angle, locked in place, as if their neck muscles were connected to their capacity to concentrate. The experienced would lace their fingers together to show that this was off the record, even though, the girl knew, their minds had become ultra-precision tape recorders. The inexperienced kept a pen or pencil in one hand and a small notepad opened on their laps—though not quite the mental-recording experts, they had mastered the ability to write without taking their eyes off the little girl, who never took her eyes off their notepads.

That Play-Doh-kneaded smile in place, they’d ask in a voice neither loud nor soft.

At four years old, she had simply stared, wondering what language that word belonged to. By five, she finally learned to nod, and by six, added her own Play-Doh-kneaded smile, despite coming no closer to solving the puzzle. By seven, and definitely by eight, she knew what the word didn’t mean. It didn’t mean waking at the crack of dawn, bees in the pit of her stomach as she fought hard to keep down the lumpy mush meant to provide sustenance to steady her for the formidable journey ahead. It didn’t mean the Gatekeeper filling the bathroom sink with warm water for the daily scrubbing, while constantly lamenting how the little girl was too lazy to bathe or dress herself. It didn’t mean being yanked out the door, neatly dressed, with every strand of hair in place, down the endless, concrete street where her tiny patent-leather shoes barely touched the ground. It didn’t mean holding on tight to the Gatekeeper, whose own footsteps flew on air.

On those days, in those early morning hours, the little girl was barely able to catch her breath, climbing the stairs to wait for the loud, clanky subway train with the big L on front and, on the inside, the hard, plastic seats on which they never sat. With the train screeching to a stop, she and the Gatekeeper stepped off, making sure not to fall into the perilous crack. The little girl still desperately grasped the Gatekeeper with both hands as they walked the dark and dingy path to another subway car, this time two large Gs on its face. Boarding, they took seats, the ride long—fifteen local stops—all underground, with nothing but darkness between the opening and closing of doors, the bees in her stomach loudly swarming, searching for their own escape. Then it was the Gatekeeper taking her hand, leading her out of the darkness onto the street; then readying her scrawny little legs for the grueling climb up and down the streets of the aptly named neighborhood of Forest Hills.

Here there might be happiness, if not for the struggle the little girl had in scaling the first few blocks, their towering buildings smudged together. Inside doorways were men in funny red and blue suits, offering charitable waves. The little girl, head lowered, the Gatekeeper yanking her forward: “How many times do I have to tell you about nasty old men?” Two blocks later, the little girl’s spirit lifted as she stepped onto her favorite street, with the most beautiful homes imaginable. Slowing her footsteps, causing the Gatekeeper to tug and yank harder, the little girl always taking in every detail of every house: the classically elegant Tudor-style homes with their triangular rooftops, massive wooden doors, and large diamond-paned windows missing the heavy drapes and Venetian blinds the Gatekeeper insisted on clothing her own windows with. These homes, open and inviting—the little girl longing to break free of the Gatekeeper, to race into the sanctuaries she believed them to be. Finally, a few blocks more, reaching their destination—a cluster of magnificent homes time had tossed aside—the Gatekeeper led her to the biggest, where old-fashioned, iron-wrought doors opened to a set of large marble steps her tiny feet had enduringly taken to memory over the past few years.

The main foyer was massive, furnished with intricately upholstered chairs and velvet sofas, which had the look and feel of antiques roped off in a museum. Turning left, the little girl stopped at the closed door of the small office where she’d drawn dozens of pictures of houses, and trees, and girls. And moms. The Gatekeeper yanked the little girl to a grand room crammed with desks and harried Guardians scribbling away on mounds of paperwork. Locating their latest Guardian, the two were led back out, to another celestial home. This one a bit smaller, but warm and inviting, though the large fireplace always went unlit, no matter how frigid the temperature outside or within. The little girl imagined this was the home of Hansel and Gretel before they were sent off to fend for themselves. By this time the buzzing nest of bees in her stomach had morphed into startled hummingbirds unable to freely flap their wings, as she and the Gatekeeper found themselves safely deposited into the large holding room to wait with the other Gatekeepers and hopeful children. The Gatekeepers exchanged battle stories of the damaged, abused, and hopeless left in their care, while the abandoned children played with the broken and salvaged toys donated for their amusement, awaiting the plucking of their lucky lottery number.

The little girl, refusing to leave her chair, always sat in direct line with the front door, keeping her head lowered. But not enough to miss the moment she’d be able to stare into the face that was fading as fast as she was growing, a face she’d only seen three times since being entrusted to the Guardians and the Gatekeepers and, unknowingly, a face she’d only see once more, before the end of her eighth year. There, she waited, as other children rushed into the arms of tall and short and fat and skinny and dark and light men and women, but mostly women: kisses, hugs, and squeals of joy wafting their way to her, while she longed to wrap her own bony arms around a woman whose nooks and crannies of warmth and security were as false and tainted as the little girl’s own memories.

The room slowly emptied. The handful of remaining children kept to themselves, but unlike the little girl, disguised their anxiety with broken puzzle pieces that refused to replicate the tranquil landscape right outside the window. One or two rambunctious kids threw themselves into the loudest, most obnoxious toys: their favorite, the popping game where two numbered dice sit trapped inside a plastic globe, their little fingers repeatedly pressing down, causing the dice to collide. By this time, all these sounds in direct competition with the hummingbirds inside the pit of the little girl’s stomach, heading for another metamorphosis into something that gouged at her insides, causing her eyes to tear up—despite having told herself that, this time, she wasn’t going to cry. And long after the last kid dematerialized, the little girl, slowly rocking back and forth, hoping against all hope that this was just a very bad dream, from which she would wake at any moment and find herself back at that place which she could only remember if she closed her eyes real, real tight. Finally, with all hope gone, the little girl pushed herself to her feet. Numbed and hollowed, accepting the Gatekeeper’s hand, she was led back out the door, back down the street where the houses taunted her with the happiness she often imagined lay trapped within, forbidden to reach little children who failed to understand its meaning.